As a young priest, Pope Benedict put his name to a document calling for the Church to seriously investigate the obligation to priestly celibacy.

Joseph Ratzinger was one of the signatories of a 1970 document calling for an examination of priestly celibacy which was signed by nine theologians.

The memorandum was drawn up in the face of a shortage of priests and other signatories included Karl Rahner and the future cardinals Karl Lehmann and Walter Kasper.

The German newspaper Die Sueddeutsche reported about the document today.

The memorandum, which was sent to the German bishops reads: “Our considerations regard the necessity of a serious investigation and a differentiated inspection of the law of celibacy of the Latin Church for Germany and the whole of the universal Church.”

According to the Sueddeutsche, the document said if there were no such investigation, the bishops’ conference would “awaken the impression that it did not believe in the strength of the Gospel recommendation of a celibate life for the sake of heaven, but rather only in the power of a formal authority”.

If there weren’t enough priests, the document said, then the “Church quite simply has a responsibility to take up certain modifications”.

The signatories who had drawn up the document acted as consultors to the German bishops’ conference in a commission for questions of Faith and Morals.

BERLIN - Several prominent Roman Catholic politicians have urged German bishops to lobby their countryman Pope Benedict for a change in Church policy to ordain married men in response to a worsening shortage of priests.

The group, including the speaker of parliament and a cabinet member, backed up its call by quoting a 1970 essay by the present pope where he predicts the Church "will know new forms of ministry and ordain upstanding (lay) Christians as priests."

The German bishops estimate that two-thirds of all Catholic parishes in the country will not have their own priest by 2020. As in other countries, bishops have been merging parishes to have the dwindling clergy minister to ever larger areas.

Pope Benedict has firmly ruled out any reform of priestly celibacy, despite calls from some bishops -- especially in German-speaking countries -- to consider a change.

The politicians, whose appeal will be printed in Saturday's Frankfurter Allgemeine Zeitung, argue that upholding celibacy is not as pressing as "the need of many priest-less parishes that are no longer able to celebrate Mass each Sunday".

The politicians said the Church should ordain "proven men," pious married Catholics whose wives are beyond child-bearing age. If the Vatican continues rejecting this option, they said, the German Church should "consider a regional exception".

The appeal appeared to have little chance of success in the Vatican, which often urges Catholics to pray for more vocations to the priesthood, but it reflected a deep concern among German Catholic laymen about the priest shortage.

German Catholicism was shaken by the sexual abuse scandals that swept through Europe last year. Some critics blame clerical abuse of minors on celibacy, a link the Church denies.

In the wake of the scandals, polls have found that about a quarter of German Catholics are considering leaving the Church. 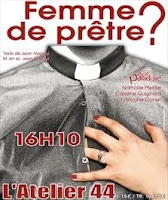 A play about priests' women is being reprised next month in Lausanne, Switzerland. "Femme de prêtre?", written and directed by Jean Chollet, who writes under the name Jean Naguel and has a degree in theology, had its debut last summer at the Avignon Festival.

The play deals with two love stories that come together. Fr. Matthieu (Christophe Gorlier) has been a priest for 20 years in the town of Limoux. Madeleine (Nathalie Pfeiffer), his assistant, helps him with charitable works while they carry on a secret romantic relationship on the side. Into this mix comes a young woman, Chloé (Caroline Guignard), who is supposed to be helping Madeleine put on a concert. Chloé provokes a spiritual crisis by confessing to Fr. Matthieu that she too is in love with a man who professes to be a priest. The play explores the theme of celibacy and secrecy. 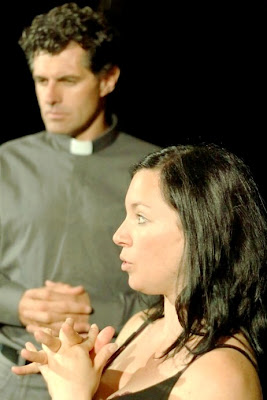 In connection with the upcoming production, Bonne Nouvelle, the magazine of the Evangelical Reformed Church of the Canton of Vaud, ran the following article about "Sarah" [a pseudonym], a real life woman involved with a priest. We have translated it into English:


Sarah is 62. For many years, she has loved the same man. One peculiarity: she shares her life clandestinely with him, since he's a priest. She is not alone in this. The association that has been created around this issue has been in contact with 500 women for whom priestly celibacy has caused problems these last twenty years. The situations are quite diverse. The priest was able to leave his work to get married, the relationship broke up or, on the contrary, as in Sarah's case, still lasts. "Many priests have a woman, but they don't talk about it", Sarah avers.

"These love stories, you can't control them," she says. "When you discover that your lover is a priest, you're idealistic and you imagine that everything will change. But the years pass and you're still in the same place." At the cost of anonymity, the couple might spend some good times together, but the status of woman in the shadows weighs heavy. Sarah says she suffers because she isn't acknowledged by society. She has to be careful not to display more than friendship publicly. Someone might denounce them. "The hardest thing is not being able to live together," laments the woman who has been seeing a priest for a long time.

Does her priest friend feel guilty about living the life of a couple? "No, he can't preach about love without experiencing it himself," Sarah answers. "It has never hindered his work. On the contrary, my support helps him." Sarah believes most people are in favor of marriage for priests. "It's just the hierarchy that's blocking it. It's not normal that priests can't marry. Marriage doesn't take away from the quality of the work of pastors."

Sarah has never regretted her choice, in spite of the difficulties. "The more I move ahead, the more I think that maybe my mission is to further the debate about mandatory celibacy, to fight to abolish this obligation for priests. It's the women who will make things move. The priests don't dare to talk about it, for fear of losing their job."

"I believe deep down inside me that it's going to change someday, but I don't know if I'll see it. I think about the women who are younger than me, for whom I wish a less tumultuous life. It's already progress that our association can exist. That would have been unimaginable thirty years ago. It's important to feel that we're not alone."

Sarah doesn't have any children but says that she knows women in her situation who do. "If they don't create a scandal and remain discrete, they leave them alone," she says. "There's such a shortage of priests..."

The future? "I live from day to day. It's going to stay that way. Maybe it will be better when my friend retires. But he has to wait until he's 75, quite a few years yet..." Sarah doesn't hide her resentment towards her friend's hierarchy. "They know we exist but they won't acknowledge us. That's what's hardest to take. In the end, it's the priests' women who are the victims of the situation," she says.

NOTE: Organizations that support women involved with priests with which the producer of this play is collaborating include the Swiss group ZöFra and the French group Plein Jour.

Photos: Poster and a scene from the play with Fr. Matthieu and Chloe.
Posted by Rebel Girl at 6:04 PM No comments: