33 and out: A former Franciscan provincial chooses Lutherans and love

BOLZANO - At 56, he has decided to change churches because he doesn't agree with the Church hierarchy about celibacy. This is why Georg Reider (photo) has decided to abandon the role of Franciscan priest to go into the Evangelical Lutheran church.

The affair came to light after the announcement that the priest, who was formerly a Franciscan provincial, has been relieved of the last position he held, managing a Franciscan welcome center in Appian, near Bolzano. The cleric had kept the job despite the fact that he had reported to his superiors the decision to move over to the Protestants because the Catholic Church had found his religious position to be incompatible with his relationship with a woman.

The former Franciscan told the diocesan weekly Sonntagsblatt that "it's a valuable relationship, which I can not and will not give up. It would not be fair either to the persons concerned or in respect of my testimony of faith."

According to an article in Südtirol Online published in March when he decided to change denominations, Fr. Reider had been a Franciscan friar since 1977. From 1992 to 2000, Reider, who has a PhD from the Pontifical Salesian University in Rome, taught religion and spirituality at the Higher Institute of Theological Education in Bressanone. Reider was Provincial of the Franciscans in Alto Adige from 1996 to 2001.

The priest told Südtirol that he no longer wanted to hide, that he felt his relationship helped him to have a better understanding of what his parishioners were going through and to be a better minister. He said that he anticipates going through hard times but that, in the end, "I want to go my way."
Posted by Rebel Girl at 1:14 PM No comments:

Should Bishop Robert Finn resign? It would be a rare example of accountability. But this question, I believe, is largely irrelevant to the central problem behind the ongoing priestly sexual abuse scandals.

I am a lifelong, devout Catholic and a historian. To me, the central problem is not the fact that a relatively few priests have sexually abused children, evil as that is. Priests are prone to the same failings as everyone else. Like anyone else, they should face appropriate criminal penalties and civil liabilities.

Neither is the real issue those bishops who have been negligent in confronting the problem or complicit in covering it up. They too must be held legally accountable.

Most absurd of all, the main problem is not the cultural upheaval of the 1960s. A recent study blamed in part the “patterns of increased deviance in society” at that time. This implies the existence of a golden age of priestly celibacy that never existed.

As I see it, the central problem behind the ongoing clerical abuse scandal is the all-male, celibate priesthood. It is an embarrassing holdover from the Middle Ages.

Da Vinci Code aside, real historical evidence shows that women’s roles in the Catholic Church were increasingly restricted as the early church became established. At the same time, the view of all sexuality as evil crept into the church. The origins of this sex-denying ethic were cultural, not scriptural.

Other issues, such as the inheritance of church property for the many priests with families, also led to the church increasingly to insist on absolute priestly celibacy.

The result today is a closed society of men held to a standard Jesus never established, the apostles did not follow, and many fine priests cannot meet.

There is simply no valid scriptural or theological basis for the celibate male clergy. Almost all other Christian churches rejected celibacy centuries ago. Many have also admitted women to their clergy. Yet Rome still condemns these changes as strongly as it once condemned Galileo’s proof of a sun-centered universe.

Would a Catholic clergy composed of men and women, single and married, prevent clerical sexual abuse? Of course not. But can anyone doubt that women priests would be less likely to protect their deviant peers?

Just as Pope Urban silenced Galileo but not his truth, Rome today has banned discussion of a female priesthood. Yet the “sense of the faithful” has moved beyond the sexism and sexual dread of Church leadership.

Bishop Finn, your people are angry. Your many good priests are humiliated. I do not call on you to resign or to implement weak reforms of the current system. I call on you to speak out for sweeping reform of the priesthood — for women’s ordination and optional celibacy. That would be more powerful than any apology.

John Veal is a lifelong Catholic and a history teacher. He lives in Kansas City.
Posted by Rebel Girl at 12:38 PM 4 comments:

Member of Les Prêtres drops out of seminary 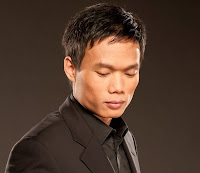 The youngest member of the French priest trio sensation Les Prêtres, seminarian Joseph Dinh Nguyen Nguyen, has stunned his public -- and his bishop -- by revealing that he will not be returning to seminary. Nguyen, who had been studying in France since 2003 with permission of the bishop of Saigon, had been on a routine leave of absence for vocational discernment since 2007.

Les Prêtres was founded by Msgr. Jean-Michel di Falco, Bishop of Gap and Embrun (Hautes-Alpes). In addition to Nguyen, it includes Fr. Jean-Michel Bardet, pastor of the Cathedral of Gap, and Fr. Charles Troesch, chaplain of the Basilica of Our Lady of Laus. The trio recorded their first album, Spiritus Dei, last year to fund the construction of a church in their diocese as well as the construction of a school in Madagascar.

But his experience touring with his clerical colleagues affected the young seminarian. Nguyen told Le Nouvel Observateur that he has decided not to return to seminary because he wants to get married and have a family. "During the concerts, I saw it was possible to live out one's faith in a family, and it made me want to do that," he explained. "The road has been long but that's it; my decision is made."

But he's not abandoning his singing partners yet. The trio's concerts are guaranteed at least until the one on November 13th at the Palais des Congrès in Paris.

Posted by Rebel Girl at 2:51 PM No comments:

Married man to become a Catholic priest in Sacramento

This morning, in an elaborate ordination ceremony at the Cathedral of the Blessed Sacrament in downtown Sacramento, Jeff Henry will make diocesan history.

With his wife and daughter watching, Henry will become the first married man in the region ordained as a Roman Catholic priest.

"I decided to pursue it until God said no, and God never shut the door," Henry said.

The door was opened by church leaders. Since 1980, the Roman Catholic Church has had a special provision for married ministers of other faiths to become Catholic priests after converting.

Henry, 51, will join a brotherhood of about 100 married men across the country who are now Catholic priests, according to Mary Gautier, senior research associate of the Center for Applied Research in the Apostolate at Georgetown University. "Most are former Episcopalians, but there are a few Lutherans and one Baptist that I know of," she said.

Henry is not the only man who will be ordained at the cathedral today. Jose Beltran and Brian Soliven will also become priests. In front of a packed church, they will promise chastity and obedience.

Henry will promise fidelity to God and to his marriage and obedience to the bishop. He and his wife, Peg, have been married 26 years.

"I'm very proud of him," said Peg Henry. "This is a real gift for us all to share this together."

Peg Henry and daughter Teresa, 21, will participate in the two-hour ceremony. They will help Jeff Henry don his vestments, a job typically done by other priests and close friends.

"At first it caught me off guard because I didn't know he could do this," she said. "But it's his calling."

The Catholic Church already has married priests in its Eastern rite, which never prohibited a married clergy. But the Latin-rite church has made celibacy a condition for ordination for centuries.

Those pushing for change in the church say ordination should be open to anyone called to serve.

"What about the lifelong Catholic men who had to leave? It's painful for some of them to see married priests being accepted when they had to leave simply because they fell in love," said Sister Chris Schenck, executive director of FutureChurch, a coalition of Catholics working toward full participation in the church.

She cites the priest shortage and its impact on parishes around the country as one reason for the church to change its celibacy requirement. "There are many married Catholic men, good men, who would be willing to serve again," she said.

Sacramento Catholic Bishop Jaime Soto said "every priest brings richness of his own experience and uniqueness to the priesthood." He is impressed with the Henry family. "Jeff's marriage will bring an added quality to his preaching ministry as well as his pastoral ministry."

He said the priests in the diocese are supportive of Henry. "Priests will laugh and say that the church is a very jealous spouse and Jeff Henry now has two of them," said Soto.

Peg Henry said that, as the only wife of a Catholic priest in the diocese, she will "take it slow and see what God has in store for me." The couple will not live in a church rectory, as most priests do. They will continue to reside in their Vacaville home.

For now, Henry will continue working at St. Patrick-St. Vincent High School in Vallejo and will celebrate Mass on weekends at St. Vincent Ferrer in Vallejo. He has not been assigned a parish.

"People are supportive and willing to give me a chance," Henry said. "I have faith that God's spirit will work in the way it's supposed to."
Posted by Rebel Girl at 2:46 PM No comments: