Bishop of Antwerp would welcome opportunity to ordain married men

Msgr. Johan Bonny, the bishop of Antwerp, Belgium, told De Standaard this weekend that while he values celibacy as a prophetic sign in a society that trivializes sexuality, he would be happy to be able to ordain married men, not just because of the priest shortage but because they would enrich the pastoral ministry. He mentioned that the Church already has married priests in the Eastern rite churches, as well as the married men from other denominations who have been brought into the Roman Catholic priesthood through the Pastoral Provision.

On the other hand, he told the newspaper that ordaining women was a more complex question theologically and biblically. He said that while he believed women priests would be accepted in Belgium, he wasn't sure they would on a worldwide basis. He added, however, that he tries to promote women who are active and committed to positions of responsibility in his diocese.
Posted by Rebel Girl at 3:33 PM 1 comment:

Still celebrating in the Philippines

Three Catholic Ilonggo priests with families are calling fellow Filipino priests who have children or who are married to continue celebrating the Eucharist.

“We, the married priests or priests with families from Iloilo, urge our brother priests to go back to their fundamental calling and celebrate the Eucharist,” said Fathers Hector Canto, Jesus Siva and Jose Elmer Cajilig.

“Begin with your family, especially on the day of the Lord,” they said, addressing the Philippine Federation of Married Catholic Priests Inc., which is holding its 13th national convention in Dumaguete City, Negros Oriental.

The three priests are continuing their priestly function even as they urge the Vatican to grant optional celibacy to priests.

Canto is married with three children while Siva and Cajilig are unmarried priests who also have children.

The three perform weekly Sunday masses at a mountainous village in Lambunao, Iloilo and also perform rites for baptism and burial in various Iloilo towns and even in Iloilo City.

Canto and Siva are said to have been suspended from functioning as a member of the clergy by deceased Jaro Archbishop Alberto Piamonte in 1998 while Cajilig took an indefinite leave in 1997.
Posted by Rebel Girl at 12:16 PM No comments:

Sometimes the glacial pace of Vatican disciplinary bureaucracy can be downright amusing. Last week, Archbishop Peter Kairo of the Nyeri Archdiocese in Central Kenya openly read a letter from the Vatican from the pulpit formally removing Rev. Dr. Peter Njogu Kibutu from the Roman Catholic priesthood. 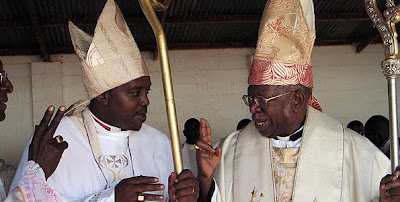 That would be approximately one year after the priest was consecrated a bishop of the Restored Universal Apostolic Church by former Roman Catholic Archbishop Milingo (photo) in an elaborate and very well publicized ceremony in Nyeri. Bishop Njogu is married and has three children. He was part of a group of ten priests who publicly left the Roman Catholic church in 2009 to affiliate with Milingo over the mandatory celibacy issue. He says he left the Roman Catholic priesthood seven years ago.
Posted by Rebel Girl at 11:28 AM No comments: