Quote of the Day

"I'm... obsessive-compulsive. I have three dogs and four cats, and the bishop... doesn't approve. And my response is, well bishop, when you let me get married, I won't have to have so many pets around."

-- Fr. Steve Porter, pastor of St. Catherine of Sienna in Rialto, CA and soon to be star of a new reality TV show "Divine Intervention" when asked by the Contra Costa Times about celibacy.
Posted by Rebel Girl at 3:18 PM No comments:

In late October, groups of faithful Catholics will join together to honor their parish priests and advocate for a return to the tradition of a celibate and married priesthood in the Latin rite of the Roman Catholic Church. Over thirty celebrations are scheduled in cities all over the U.S. as well as in Australia, Canada, Malaysia, and the United Kingdom on or around October 31, Priesthood Sunday or World Day for Priests. (see http://futurechurch.org/fpm/optcel/priesthoodsunday/celebrations.htm or contact emily@futurechurch.org for locations)

"We need to return to our early Church custom of having both a celibate and a married priesthood," said Bill Wisniewski, FutureChurch board member. "St. Peter was married. St. Paul was celibate and the early church flourished perhaps in part because it incorporated both ministerial charisms. Since celibacy is a gift from the Holy Spirit, it will not disappear, but is a distortion of the gift to demand it of priests who are not called to it."

"We are excited by the excellent response since it is the first time we have ever held this special celebration," said FutureChurch Special Projects Coordinator Emily Holtel-Hoag. "It tells me how much Catholics appreciate their parish priests, and how much they are concerned about the future of the priesthood if the Church doesn't change celibacy rules."

"Parishes in Europe, the United States and the United Kingdom are closing while thousands of Catholics in the developing world have virtually no access to Mass and the sacraments because of too few celibate priests," said Sr. Christine Schenk, FutureChurch Executive Director.

"At least 30 Bishops around the world, have openly called for discussion of celibacy rules," said Schenk who named three bishops in Belgium and the head of the German Bishops conference, Archbishop Robert Zollitsch who recently spoke out in the wake of revelations of widespread clergy sex abuse in Europe.

World Priest Day was started by Worldwide Marriage Encounter in 2000 as a way to honor and affirm those men who chose to receive the Sacrament of Holy Orders and faithfully serve the people of God through ministry and prayer. In 2007, the day was moved to the last Sunday in October to coincide with the Serra Club's celebration of Priesthood Sunday.

FutureChurch isn't stopping with prayer, it is also taking action. In the past year over 5,000 electronic and paper postcards have been sent to Cardinal Claudio Hummes, Prefect of the Congregation for the Clergy, and to

local bishops asking them to "begin discussion at the highest levels of the Church about the need to return to our earliest tradition of permitting both a married and a celibate priesthood."

The FutureChurch website has been configured to send electronic and paper postcards in German, Spanish, French, Italian and Portuguese as well as English. Scores of people have downloaded free organizing kits from begin educational programs, prayer and advocacy initiatives in their locales. An educational web video is also available on youtube.com (http://www.youtube.com/watch?v=I6tB0lWsnhQ).

A 2004 anonymous survey of 14,000 priests in 53 US dioceses found that sixty seven percent of respondents believed the church should open discussion about mandatory celibacy. The survey was spearheaded by FutureChurch in partnership with Call To Action. Many priests spontaneously said it was time to discuss ordaining women too, beginning with women deacons.

FutureChurch believes the Church will not be whole or just until we recognize all of the priestly vocations, married and celibate, male and female that God is pouring upon the Catholic Church.

FutureChurch also advocates for the restoration of women to the diaconate in the So All Can Be at the Table campaign as an important next step for advancing women's roles in the Church. For more information on FutureChurch's programming regarding women's leadership in the Church, go to www.futurechurch.org.

To download a free copy of the Optional Celibacy: So All Can Be at the Table Priesthood Sunday prayer service, go to http://www.futurechurch.org/downloads/optcel.htm.

For locations of celebrations go to http://futurechurch.org/fpm/optcel/priesthoodsunday/celebrations.htm .

FutureChurch, headquartered in Cleveland, Ohio, is a U.S. coalition of 5,000 parish based Catholics striving to educate fellow Catholics about the seriousness of the priest shortage, the centrality of the Eucharist (the Mass), and the systemic inequality of women in the Catholic Church. FutureChurch makes presentations throughout the country, distributes educational and informational packets and recruits activists who call on Catholic leadership to discuss opening ordination to all baptized persons who are called to priestly ministry by God and the people of God.
Posted by Rebel Girl at 11:44 AM No comments: 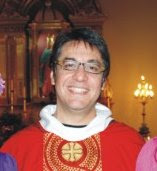 While celebrating Mass in Rio Tercero, Cordoba, Argentina, Fr. Germán Daveiga (38, photo), announced that he was leaving the priesthood. While stating that he was not in love with anyone at the moment, Fr. Daveiga explained that he preferred to "avoid difficult issues with celibacy and thus [had] decided to step aside out of respect for the Church, the people, my family, and myself."

Later in a radio interview with Mitre 810, the priest clarified his position, saying that “celibacy lived honestly and faithfully sometimes leads us priests to a life of loneliness that is hard to bear." He mentioned that the Eastern rite churches allow for married priests and suggested it was time for the Latin rite ones to reconsider the question. “Celibacy has an added value, but that value is not achievable by everyone. Also, we are not living under the same conditions as in other eras," he added.

In a different radio interview, Fr. Daveiga, who also served for three years as a missionary priest in Camden, NJ, said that he will be leaving the rectory and will seek work outside the Church. He emphasized that he is not an activist and that he had mostly good memories of his time in seminary and his eight years of service as a priest. He said that he has received a lot of support in his decision from his family and his parishioners.
Posted by Rebel Girl at 12:26 PM No comments:

Married Men of the Cloth

Keith Forster was a young Catholic priest who spoke to women inmates at a Stockton jail. Nancy Wagner was his assistant. After he lost his sight to meningitis, she found him Bible readings in Braille. When he left Stockton to preach elsewhere, Keith and Nancy would correspond by sending each other love cassette tapes. “He changed, I changed, but the church hadn’t,” Nancy said.

Under the pressure of canon law, which forbids the marriage of priests, Forster had to choose between tradition and his feelings for Nancy. He chose his feelings, even if that meant excommunication. On a September afternoon in 1971, the two married in Nancy’s parent’s backyard.

And last Sunday, September 26, Keith Forster and John Hydar — who also left the church at one point to get married — were given the leadership of St. Anthony’s Community, formerly St. Anthony’s Franciscan Church, in a ceremony called “The Laying on of Hands.” “This ceremony is about the community affirming us and we are affirming our commitment to the community,” Hydar said. Dudley Conneely is also married and serves as a priest part-time within the church when he’s not abroad.

The idea of marriage wasn’t a new one among Catholic priests back in the ’60s, and Forster was part of a growing movement of priests attempting to break away from the unflinching traditions of Catholicism. The Vatican II reforms (1962-1965) were meant to address, in addition to other things, marriage among priests, but the discussion never went anywhere. “I had high hopes for the reforms,” Forster said, “even though they never really took hold.”

Hydar first met his wife, Roberta, at the Ventura Mission in 1966. He was an assistant priest and Roberta Egerer was a nun teaching at the parish school. In 1971, the two married. “It’s a church law; that’s it,” said Hydar. “I have never for a moment regretted marrying this wonderful lady.”

For years after he left the church, those who knew Hydar as a priest would ask him to perform baptisms, marriages, and funeral ceremonies. And for years, he denied their requests. Then in 1992, he finally said yes. “I’m a priest, always have been,” he said.

Father Leo Sprietsma, who left the St. Anthony’s community for health reasons after 12 years of service, believes that the Catholic Church needs to rethink its structure but had mixed feelings about leaving the church in the hands of the married priests. “But since I left, they seem to be doing a good job,” Sprietsma said.

Under Canon Law No. 290, once a Roman Catholic priest, always a priest. According to Canon Law No. 843, priests are obligated to serve if called by a community or by anyone in need. “That wasn’t in their agenda,” said Forster. “They wanted a canonical priest.” But Forster and Hydar were all the St. Anthony’s Community had.

Although the Vatican does not recognize St. Anthony’s Community, Forster and Hydar are sticking to their commitment the same way they stuck to the gut feeling that led them to marriage. They are members of Corpus, a reform group in the Catholic Church that works for a renewed priesthood of married and single men and women. “There’s no shortage of priests,” Nancy said, quoting one of her favorite writers, Joan Chittister. “There’s just a shortage of celibate priests.” According to CITI (Celibacy Is The Issue) Ministries, more than 25,000 Roman Catholic priests have been married in the United States since the 1970s and more than 110,000 worldwide.

The transition in leadership hasn’t come easily. In the process, the 40-or-so people who make up the St. Anthony’s Community lost about a dozen members who rejected the idea of worshipping under married priests. “We’re still friends, we just have a different way of seeing things,” Forster said.

Others wouldn’t have it any other way. “What’s better than having a priest that’s married?” asked St. Anthony’s Community member Jude Blau. “This is what society now likes … We want to be in the 21st century, not the 19th.”