The Catholic priest with nine children

Father Ian Hellyer is a Roman Catholic priest – but far from being celibate, he's a father. Not just to a couple of children, either: in true Roman Catholic fashion, Father Ian has lots of them – nine, in fact, ranging from 18-year-old Clare to seven-month-old Rose – taking in Teresa (17), Angela (15), Martha (11), John (nine), Luke (seven), Simeon (four) and Gregory (two) in between... 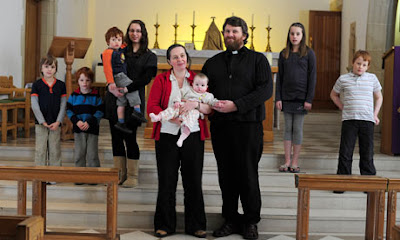 A Roman Catholic Church splinter group, the Kenya Ecumenical Reformed Catholic Church has said celibacy forms the basis on which the church would grow and expand. Head of the church archbishop Godfrey S. Wasike said the rule requiring that catholic priests live a chastity life is promoting faster growth of his church. “The catholic church should re-look at the rule with a view of opening up to realities of nature and allow the church priest to marry and raise families if it expects to remain relevant to the dynamic world,” said Wasike. He said that celibacy in the church has rocked families of faithful and it was not good for the practice to continue.

Between a rock and a hard place: love or the collar


It's now been 14 years since former priest José Antonio Fernández lost his job as teacher of religion because he was married. It seems that a photograph in a newspaper in which he came out with his wife and children as a member of Movimiento pro Celibato Opcional was to blame. Now the European Court of Human Rights in Strasbourg is reviewing his case. What José Antonio Fernández denounces is the hypocrisy surrounding his dismissal since, he argues, the Bishop of Cartagena is hiding behind "respect for parents' feelings" in order not to renew his contract, when he states that he introduced himself in each class -- from 1991 to 1997 -- to his students and their parents as a priest who didn't hide his status.

Fernández Martínez isn't the only case among priests who formalize their relationships with women. Movimiento pro Celibato Opcional ["The Optional Celibacy Movement"], whose very name already proclaims one of its objectives, estimates that around a quarter of the priests who are working in Spain got married between 1970 and 1990 or 1995, a figure that one of its members, Ramón Alario, who represents MOCEOP in the European Federation of Married Priests, thinks can be extrapolated to Galicia. In some countries in South America, such as Brazil, the number would even increase to one third, without the Christian communities raising many objections. "Many believers accept it as normal that the priest would live a normal life, but since it isn't lawful, practical acceptance is limited to small communities," he states.

This man who has a degree in Philosophy and a doctorate in Theology from the Universidad Pontificia de Comillas is happy that, since this organization was founded in the mid-70s, "many married priests have come out of the closet", which he considers an "achievement". "From living clandestinely, in hiding, with feelings of guilt, they have managed in many cases to help people live normally and not have problems of conscience and many communities have no problem with having a married priest who lives a normal life," he asserts.

Alario, who compiled the book "Curas casados. Historias de fe y ternura" ("Married priests: stories of faith and tenderness" - MOCEOP, 2011) that pulls together 23 of these cases -- acknowledges, nonetheless, that the married priests "boom" happened from the 70s to the 90s. "From that point on, we have questions. The younger priests who have been falling in love, do it secretely. There's no way to contact them," he explains. For Alario, this situation can be explained in part -- but only in part, he stresses -- by two factors. On the one hand, the economic situation. "It's not that it was easy for us, but some more, some less, found a civilian job and that's how we lived. The current situation means that anyone who abandons the ministry has more problems when he enters the labor market," he says. On the other hand, he adds, there's the generation gap and the concept of what the Church is. "Today's priests are more obedient and submissive to the hierarchy," he says. However, the priests of MOCEOP, he emphasizes, "are priests, and if the community "needs" them, they're "available."

This is the case, for example, of Galician former priest Juan Caamaño, now a driving instructor, who left the priesthood, not for love but to devote himself to that profession. "I changed because of life circumstances; I felt that my work was valued more," he explains. Love, he says, came later, and the family too, "a plus I hadn't counted on that gives me a lot of satisfaction."
Posted by Rebel Girl at 5:50 PM No comments: