Celibacy in the Eastern rite churches

OrthoCath, an Eastern rite Catholic blog, has an interesting article analyzing a recent comment by Cardinal Leonardo Sandri during the Eastern rite bishops' ad limina visit to the Vatican about the importance of embracing celibacy since it is the norm for Catholic priests in the United States. The blog writer believes that this is an indirect response from the Vatican to Melkite Greek Catholic Bishop Nicholas Samra's suggestion that he is considering directly admitting married men into seminaries to answer the priest shortage. This is a very thorough article on the celibacy tradition in the Eastern rite churches and includes links to other in-depth articles for those who want to know more about this.

José Antonio Fernández, a Spanish married priest, was dismissed from his job as a teacher of religion in 1997 after a newspaper published a photo of him and his family at a MOCEOP (Movement for Optional Celibacy) event. In Spain, teachers of religion, although they work in secular schools, are selected from a slate of candidates who have the approval of the Catholic Church, per a long-standing legal agreement between the Spanish government and the Church. Having exhausted all legal recourse in Spain to get his job back, Fernandez took his case to the European Court of Human Rights in Strasbourg, claiming that his firing violated his rights to privacy and freedom of thought and expression.

This week the European Court of Human Rights rejected Fernandez's arguments and upheld the autonomy of the Catholic Church in making these decisions. Fernandez's attorney, José Luis Mazón, says they will appeal to the Court's Grand Chamber.
Posted by Rebel Girl at 1:09 PM No comments:

It was a hidden love. They kept it secret for almost 40 years. But after the death of the one, the other decided to come out to tell all and claim his rights. The gay partner of a priest is demanding that the Colombian government pay him a pension. That country's Constitutional Court has agreed with him.

The man, whose identity has been witheld by court order, was the priest's partner for 28 years. In 2009, the priest died and "Pedro" -- as the Colombian media has been calling him -- began steps to be able to receive the pension like any other widower. But the Social Security Institute refused to pay, alleging that the priest could not have a partner because he should have been keeping his chastity vow. However, the Court rejected that argument and ordered payment of the pension.

"Here the take-away is telling couples in the Roman Catholic Church that they also have rights and to demand them because we are in a country where democracy is important and the religious issue is separate, of no interest, since Colombia is a secular country," said attorney Germán Rincón, who is defending the priest's partner.

"The fact taht there's a couple relationship between a priest and a civilian doesn't mean that there aren't any rights," Rincón added.

"Hence this wider concept of family should be compatible with the consitutional prohibition against discrimination on the basis of sexual orientation or choice," the lawyer explained.

Although since 2007 Colombian law has recognized the property, health and pension rights of same sex couples, regardless of their social or religious condition, it's the first time that a pension has been granted to a homosexual couple that includes a priest.
Posted by Rebel Girl at 12:43 PM No comments:

From Radio to Reality: Australian priest gets married and gets "busted" for real 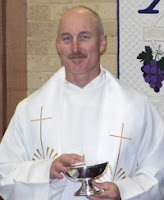 Fr. Lee won the competition, winning a car -- which he kept -- and A$20,000 in prize money which he donated to a hostel for homeless men in Sydney. The priest also claims that attendance at his church increased dramatically, especially among young people, following the competition, and that he even managed to convert the strip club manager to Christianity during the time of their "incarceration". He also claimed that his bishop, the Rt Rev Kevin Manning, had approved of his involvement and even tuned in occasionally. Nonetheless, following complaints from some parishioners about the contest, Fr. Lee was suspended for a period.

Fr. Lee's latest "stunt", however, will likely result in a permanent suspension. This week, the priest stunned his congregation and readers of his weekly column in The Glenmore Gazette, by going on 7 News and revealing that he has been secretely married for over a year to a woman he met in the Philippines named Josefina and has simply been "going through the motions" of being a priest.

Fr. Lee, who has been a priest for over 20 years, said he no longer wants to live a double life. He told his interviewer that mandatory celibacy "has to go" and that he knows too many other priests who are falling down and, like himself, living double lives. He is promising to write a tell-all book on the subject. His final newspaper column, not yet available online, is a public apology to his parishioners.