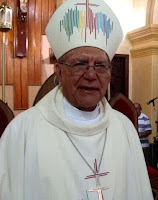 Speaking to the Folha da São Paulo, the new Archbishop of Teresina, Dom Jacinto Furtado de Brito Sobrinho, told reporters last week that, regardless of any opinions Pope Benedict XVI may have expressed on the importance of celibacy, the pontiff's words on this question are not infallible. He reiterated the Church teaching that the Pope is only considered infallible on matters of faith and morals and mandatory celibacy doesn't fit in those categories. The bishop added that "the fact that to be a priest you also have to be celibate is a discipline that the Church can change."

Dom Jacinto also commented that many bishops would like to see the celibacy requirement removed. He said that opinion is shifting towards optional celibacy and that the Holy Spirit will blow on the Church and the Pope will decide to give the Latin rite Church both options, as priests in the Eastern rite Church already have. He also pointed to Benedict XVI's willingness to admit married Anglican priests into the Catholic priesthood as a sign that change will come.
Posted by Rebel Girl at 4:14 PM No comments: