Another Argentine priest leaves to get married

The Catholic community in San Francisco, Argentina, is stunned. Baldomero Britez, priest and director of the Don Orione shelter in that city, has left the priesthood after falling in love with a woman who had been active in the choir and other activities in his parish.

The priest is seeking to be released from his vows. Britez is originally from Corrientes and moved back a few days ago to that province to settle there with his partner, according to some parishioners.

Britez was known for his warmth and good mood when celebrating Mass. He was also known for his sense of solidarity and carrying out fundraising campaigns to benefit the charitable organizations for which he was responsible.

At the end of last year, Britez announced that he would leave the leadership of the shelter, but he denied at the time that he was leaving the priesthood to start a family.

This is the second time recently that a priest has left the priesthood in that diocese. In April 2009, Victor Casas, priest of the parishes of Saturnino María Laspiur, Las Varas and Colonia Prosperidad, announced his decision to leave his role in the Church. He did it during Mass, publicly acknowledging that he had fallen in love with a young woman who was expecting his child.

Cases of priests leaving the ministry have multiplied in recent years. In the province of Cordoba, it is estimated that some 20 priests have left in the last five years. Most of the cases were in the city of Cordoba and most of them left to get married.
Posted by Rebel Girl at 3:30 PM No comments:

What a difference a year makes...

In February 2011, Delémont Journal interviewed a young Swiss priest, Abbé Jean-Noël Theurillat, and they asked him specifically how he dealt with mandatory celibacy. Fr. Theurillat gamely responded: "At a time of discernment, I did not put that obligation in opposition to the priesthood. It was clear that one didn't go without the other. Either I took the "package", that is to say everything, or nothing. But there is confusion in people's minds. Celibacy doesn't mean loneliness. I have a great professional and social environment, a family, friends, and many activities. Obviously, I've also given up sexual relations and consequently starting a family. This doesn't prevent emotions or affectivity. Nor, indeed, the questioning of my choice. But the real challenge, beyond the decision, is to know what one is going to make of it. Me, I blossom where I am, in the exercise of my vocation at the heart of humanity and reality." A vocations director could not have given a more perfect answer. 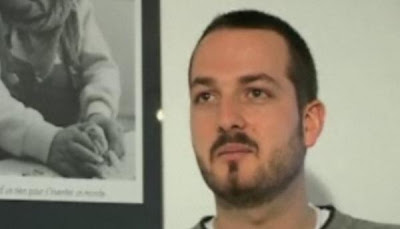 One year later, Fr. Theurillat, who was ordained in 1999 in the Diocese of Basel and served 10 years in parish ministry in val Terbi, Courroux, Courrendlin, Rossemaison and Châtillon before joining the ecumenical chaplaincy service of the Hospital of the Jura, has changed his tune. This week, hinting that he has met someone, the young priest told RFJ Radio he has been questioning celibacy for more than a year, that the questioning came well before he had a specific person in his mind and heart. With that, he became the first priest in the region to resign in more than 25 years. He has now joined the world of the laity...and the unemployed but, he says, "I feel very free, my motivation is intact. I don't know what the future of my professional life will be, but I'm approaching it with energy, motivation and enthusiasm." Fr. Theurillat has studied both theology and social work.

The Diocese issued a statement saying that it "respects the decision of Father Jean-Noël, well thought out and given with a concern for truth and openness. This choice doesn't cast doubt on the priest's personal investment and professional competence...He has exercised his priestly ministry without fault and with great commitment." They thanked him for his work and wished him every success in the future.

Now we'll see how long Jura Pastoral keeps this video (in French) of the handsome Fr. Theurillat waxing eloquently and enthusiastically about his priesthood on its website. Except for the outcome of this story, it's really a great promotional video for vocations to the religious life...