Roberto Ángel Maidana was a Catholic priest for 17 of his 46 years in Corrientes [Argentina] until last week when he was notified of the sentence of the church tribunal which prohibits him from continuing in his role. 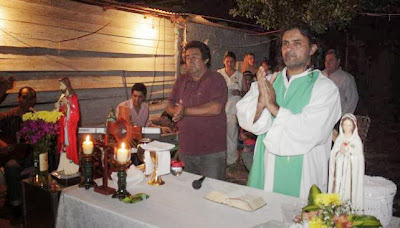 Speaking with this newspaper, Maidana himself admitted that it was a "foregone conclusion". It's that, being a priest, he fell in love a decade ago with his current woman with whom he formed a couple ten years ago and has a two-year-old daughter.

"I never concealed anything. I never played hide-and-seek. The community was always aware of who Maria Elena was. She was always at my side, getting things, working," he admits casually.

The Church deems that he committed three grave sins under Canon Law.

"Ten years ago I made the mistake of using my heart; most priests don't want to use it. I fell in love. But I always went on working in the community," Maidana points out, throwing out the opening ball in the discussion of celibacy in the Church.

"Two years ago we had a baby girl and that's when the persecution started," he says, alluding to the church authorities with whom, he asserts, he spoke "up front" about the issue.

Maidana says that as soon as his daughter was born, he registered her in the Civil Registry in Corrientes with his last name.

He notes that the church tribunal opened an investigation of him a year ago "while the baby girl's document, in my name, is from two years ago," he says, as if to point out the contradiction.

Maidana fixes his attention on the celibacy tradition: "The activity of a consecrated man is not an impediment to having his own family. Since I've had my own family, I've been more committed to service. A man who doesn't have a family or children never reaches the fullness for which he was created by God," he argues. Then he emphasizes, "The more a priest is lonely, the less free he feels. He is so shut in that he doesn't have time for anything, which is also a distortion of celibacy."

Maidana admits that he always knew his time would be up. "I knew it, I was going against a rule, a mandate. But I was also aware that in Latin America there are some 180,000 priests thinking about this. They aren't priests who have stopped being it, but people who go on working. There are even bishops who are fathers and are still active. If I hadn't given my last name to my daughter, I would have been one more in the statistics on priests who have children they don't acknowledge," he says.

For Maidana, celibacy "is a discipline but not a dogma. It's an imposition by a Church that is stuck at some point in history." He also thinks that "chastity is a point within celibacy. It's not the absence of sex but sanctifying the sexual relationship within the marital bond. It's planning together through dialogue and mutual self-giving."

From Corrientes, where he is still living, he admits to keeping "some hope" that the current Pope Francis will be the one to open the discussion to end celibacy.

"I go on living the same way, in my mother's house, and selling food to cover expenses. I lived and was a priest in an extremely poor neighborhood, with a lot of needs. The Archdiocese never gave me a house," he says.

According to the inter-diocesan tribunal of Corrientes, the Vatican dismissed Maidana as a priest for three reasons under Canon Law: violation of the celibacy rule, liturgical abuse, and violating the seal of confession.

Maidana only accepts the first charge. He maintains that the other two "are serious" and he says he didn't sign the punishment because he doesn't acknowledge them. He also complains that he never faced the church tribunal "to exercise his right to defend himself."

Meanwhile, Father Jorge Duarte Paz, a member of that inter-diocesan tribunal that evaluated his conduct, told this newspaper that in reality Maidana "didn't want to exercise his right to defend himself and that he also repudiated the authority of Archbishop Andrés Stanovnik (who received the complaints of the faithful and ordered the investigation of the case)."

Duarte Paz says he was offered various opportunities to defend himself but never considered them. "The Holy See also offered him a quieter and more diplomatic way out, that he could ask for dispensation from the clerical state, which is a grace through which he would be removed from the responsibilities of ministry, dispensed from the celibacy rule and thus would be able to marry, but he refused," he said.

The punishment, according to Duarte Diaz, "falls within the directives of Pope Francis so that serious delicts have a penalty, unless the priest repents and stops rebelling."
Posted by Rebel Girl at 12:47 PM