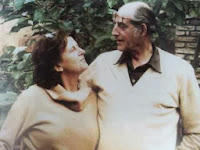 Clelia Luro, the widow of Jeronimo Podesta, former bishop of Avellaneda [Argentina] and a key figure in the Movement of Third World Priests, who had been hospitalized in the Güemes sanatorium there, died last night, according to a posting on theologian Leonardo Boff's Twitter account.

Luro was born into a well-to-do family in the Recoleta neighborhood in Buenos Aires and studied at the Colegio del Sagrado Corazón. From her youth, she had a deep religious vocation and wanted to be a nun, but she also had "strong views of the Gospel, of Jesus' message, that I couldn't reconcile with the institutional Church," she confessed some years ago in a news report.

She lived ten years in one of the Patron Costas' sugar mills and there, with the presence of a brutal reality, reached a different level of awareness. "My consciousness was raised there," she said.

"From Santa Fe y Callao, I soon got married and went to live at the Salta mill and began to experience the reality of the indigenous people, the reality of the country. I was from an upper middle class family and had not had the opportunity to experience the tragedy of the people. I had taken courses in preventive medicine at the Red Cross, so I would grab the horse and go to the huetes, the harvest huts in Oran, to teach them how to feed the children, collaborating with the mill doctor. I was doing prevention because the kids there were dying like flies," she said.

In 1966, back in Buenos Aires again, when she was now a separated woman with six children, she met Jeronimo Podesta who was bishop of Avellaneda, with whom she then shared her life -- love, advocacy, and the presidency of the Latin American Federation of Married Priests until Podesta's death at 79 on June 23, 2000.

Remembering that time, she said, "Jeronimo was a leader in the country. He was the bishop of the workers. Any problem -- strikes, stoppages, he was with them."

Statement from Clelia Luro's family, as translated from her Facebook page

Last night, on November 4th, after a few hours of hospitalization at the Guemes Sanitorium, Clelia decided to go and be reunited with Jeronimo, who had departed 13 years ago.

After Jeronimo's death, she was never the same. She missed him every instant of those 13 years.

She stayed busy, restless, trying to edit his letters, writing books, spreading his thoughts, continuing the struggle for optional celibacy and for married priests, preparing the foundation that would bear his name. But it was a lot of grief that made her fade away.

Clelia was a warrior. She and Jero fought for their love all the way to the Vatican.

A priest? No, he wasn't just a priest. He was the bishop of Avellaneda, Monseñor Jerónimo Podestá.

They suffered, But that made them stronger. They were assailed, exiled and persecuted. And they went on together, always together.

The Church hurt her, and she was always present trying to help us to think of those who would make a real Church of the People of God on the March. The country hurt her, and she fought to support the processes of change that took place in those years when she thought and felt that Jeronimo would have liked to experience and share this vigorous United Latin America.

They adored one another. They were very happy.

A story of love and struggle, surrounded by daughters, grandchildren and great grandchildren, close friends, faithful and loyal companions.

A rich life of knowledge and learning, added to their great Faith.

A clear ideology, where being an individual was paramount.

A very strong woman who defended her life story to the end.

Thank you for having given us life and having accompanied us with so much love.

Your big family will miss you...
Posted by Rebel Girl at 5:00 PM